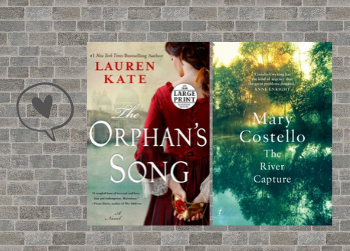 Fall in love again with the latest romantic and charming books found at your local library!

The river capture / Costello, Mary
“Thirty-four year old Luke O’Brien has left the city to live a quiet, bookish life on the River Sullane in County Waterford. Alone in his big house, he longs for a return to his family’s heyday and turns to books–especially Ulysses–for solace and sublimation. One morning a young woman arrives at his door and enters his life, with profound consequences. It is about humanity’s capacity for good and evil and what happens when Nature is thwarted. More than anything, it is a book about the life of the mind and the redemptive powers of art.” (adapted from Catalogue)

The orphan’s song / Kate, Lauren
“A sweeping love story about family and music–and the secrets each hold–that follows the intertwined fates of two Venetian orphans. When fate brings Violetta and Mino together on the roof of the Hospital of the Incurables, they form a connection that will change their lives forever. Both are orphans at the Incurables, dreaming of escape. But when the resident Maestro notices Violetta’s voice, she is selected for the Incurables’ world famous coro, and must sign an oath never to sing beyond its church doors. The Orphan’s Song takes us on a breathtaking journey of passion, heartbreak, and betrayal before it crescendos to an unforgettable ending, a celebration of the enduring nature and transformative power of love.” (adapted from Catalogue)

Space invaders : a novel / Fernández, Nona
“Space Invaders is the story of a group of childhood friends who, in adulthood, are preoccupied by uneasy memories and visions of their classmate Estrella Gonz lez Jepsen. In their dreams, they catch glimpses of Estrella’s braids, hear echoes of her voice, and read old letters that eventually, mysteriously, stopped arriving. They recall regimented school assemblies, nationalistic class performances, and a trip to the beach. Soon it becomes clear that Estrella’s father was a ranking government officer implicated in the violent crimes of the Pinochet regime, and the question of what became of her after she left school haunts her erstwhile friends.” (adapted from Catalogue)

A delicate deception / Sebastian, Cat
“When Amelia Allenby escaped a stifling London ballroom for the quiet solitude of the Derbyshire countryside, the very last thing she wanted was an extremely large, if–she grudgingly admits–passably attractive man disturbing her daily walks. Lecturing the surveyor about property rights doesn’t work and, somehow, he has soon charmed his way into lemon cakes, long walks, and dangerously heady kisses. Will they let a lifetime of hurt come between them or can these two lost souls find love and peace in each other?” (adapted from Catalogue)

Love letters from Montmartre / Barreau, Nicolas
“Julien Azoulay is famous around the world for his beautiful romance novels. But last year, he stopped believing in love. When his beloved wife Hélène died, leaving him alone to raise his young son, Julien lost his faith in the happier side of life – and with it his ability to write. But Hélène was clever. Before she died, she made Julien promise to write her one letter for each year of her life and now, in this moment, in the most famous cemetery in Paris, Julien stands with his painful first letter in his hand. Here, even though Julien wouldn’t believe it, something wonderful is going to happen.” (adapted from Catalogue)

Good riddance / Lipman, Elinor
“One woman’s trash becomes another woman’s treasure, with deliriously entertaining results. Daphne Maritch doesn’t quite know what to make of the heavily annotated high school yearbook she inherits from her mother, who held this relic dear. Too dear. In a fit of decluttering, Daphne discards it when she moves to a small New York City apartment. But when it’s found in the recycling bin by a busybody neighbor/documentary filmmaker, the yearbook’s mysteries  take on a whole new urgency.” (adapted from Catalogue) 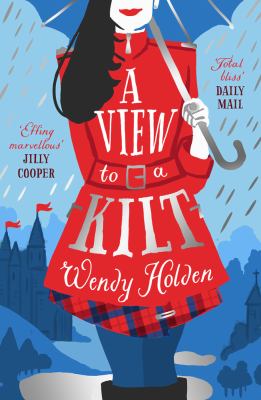 Love romance fiction? These new titles have something for everyone.  A nostalgic glimpse into war-time Manhattan theatre land, City of Girls will transport you into a whirl of charismatic characters. A danger laced placement sees Special Agent Macy Crow rekindling an old flame while her deductive skills provoke a menacing response. Shakespeare and the supernatural round out our selection taking lovers on unfamiliar journeys, despite eons of practice!

And readers rejoice as your page turning is celebrated in While You Were Reading and The Bookshop on the Shore. These novels delight in the place that reading can hold in your life. Enjoy!

While you were reading / Berg, Ali
“Meet Beatrix Babbage – 29-year-old dog-earer of books and accidental destroyer of weddings. After ruining her best friend’s nuptials, Bea relocates to the other side of the country in search of a fresh start. Bea’s job is dead-end. Her romantic life? Non-existent. Then Bea stumbles across a second-hand novel, inscribed with notes. Besotted with the poetic inscriptions, Bea is determined to find the author … and along the way, she finds herself entangled in one hell of a love quadrangle.” (Adapted from Catalogue)

Hide and seek / Burton, Mary
“Special Agent Macy Crow is gunning for a spot on the FBI’s elite profiling team. As an audition, she offers to investigate the recently discovered bones of Tobi Turner, a high school girl who disappeared fifteen years ago. While investigating with local sheriff Mike Nevada, a former colleague and onetime lover, Macy discovers a link between Tobi’s case and several others that occurred around her disappearance. But the murderer’s had years to hone his skills, and soon Macy herself becomes a target.” (Adapted from Catalogue)

Flights of fancy / Turano, Jen
“To escape an unwanted marriage, heiress Isadora Delafield runs away and disguises herself as a housekeeper. She finds a position at the home of self-made man Ian MacKenzie’s parents. Ian is unexpectedly charmed by Isadora and her unconventional ways, but when mysterious incidents on the farm and the truth of Isadora’s secret threaten those they love, they’ll have to set aside everything they thought they wanted for a chance at happy-ever-after.” (Catalogue)

A desperate hope / Camden, Elizabeth
“Eloise Drake’s prim demeanor hides the turbulent past she’s finally put behind her–or so she thinks. Alex Duval is the mayor of a town about to be wiped off the map. The state plans to flood the entire valley where his town sits in order to build a new reservoir, and Alex is stunned to discover the woman he once loved on the team charged with the demolition. With his world crumbling around him, Alex devises a risky plan to save his town–but he needs Eloise’s help to succeed.” (Adapted from Catalogue)

The bookshop on the shore / Colgan, Jenny
“Desperate to escape from London, single mother Lottie wants to build a new life for herself and her son Raffie. On a whim, she answers an ad for a nanny job in the Scottish Highlands. The children’s widowed father is a wreck, and the kids run wild in a huge tumbledown castle on the banks of Loch Ness. With the help of Nina, the friendly local bookseller, Lottie begins to put down roots in the community. Are books, fresh air, and kindness enough to heal this broken family–and her own…?” (Adapted from Catalogue)

A view to a kilt / Holden, Wendy
“Laura Lake, editor of glamorous glossy magazine Society, is in trouble. Advertising revenues are down, and her job will be in jeopardy if she can’t pick them up. According to those in the know, Scotland is having a moment. With a view to getting a slice of this ultra-high-end market, Laura’s been sent to a baronial estate. It’s supposed to be gorgeous, glitzy, and glamorous. But intrigue follows Laura like night follows day. And at Glenravish Castle Laura finds herself hunting for a scoop that won’t just save her job, it could save her life.” (Adapted from Catalogue)

Window on the bay : a novel / Macomber, Debbie
“Jenna Boltz’s life is at a crossroads. When her kids and her dear friend push her to begin dating again, Jenna is skeptical. Enter Dr. Rowan Lancaster, who saves the day when Jenna’s elderly mother suffers an accident in her home. Still fearing a romantic relationship, she insists they remain friends–until she realizes that he may be more worthy of a Paris experience than she thought. Learning to put herself first again, Jenna realizes that believing in love can take us beyond our wildest dreams.” (Adapted from Catalogue)

City of girls / Gilbert, Elizabeth
“In 1940, nineteen-year-old Vivian Morris has just been kicked out of Vassar College. Her affluent parents send her to Manhattan to live with her Aunt Peg, who owns a theater called the Lily Playhouse. There Vivian is introduced to an entire cosmos of unconventional and charismatic characters. But when Vivian makes a personal mistake that results in professional scandal, it turns her new world upside down in ways that it will take her years to fully understand. It will also lead to the love of her life, a love that stands out from all the rest.” (Catalogue)

The trouble with vampires / Sands, Lynsay
“For close to three thousand years Santo Notte has fought in armies across the world and battled his own, more personal enemies. Of all the places he might expect to encounter his life mate, a quiet corner of upstate New York doesn’t seem likely. But as soon as he makes contact with history professor Petronella Stone he knows that she will be the greatest adventure of his eternal life. But as Pet struggles to protect her nephew from a danger lurking too close to home, Santo realizes there’s another threat to her safety-him.” (Adapted from Catalogue)