Pages in this section:

Welcome to Wellington City Libraries' page of resources on Judaism. Here you'll find a cross-section of what the library holds on Judaism, some quick links into our online databases and the library's catalogue, and links to websites on Judaism selected by our subject librarians. The Dewey Decimal call number for Judaism as a subject is 296. (A comprehensive list of Dewey numbers for other religions can be found on the Beliefs homepage.)

A history of Judaism, by Martin Goodman.
Goodman traces Judaism's origins in the polytheistic world of the second and first millennia BCE to the temple cult at the time of Jesus. He tells the stories of the rabbis, mystics, and messiahs of the medieval and early modern periods and guides us through the many varieties of Judaism today. Goodman's compelling narrative spans the globe, from the Middle East, Europe, and America to North Africa, China, and India. He explains the institutions and ideas on which all forms of Judaism are based, and masterfully weaves together the different threads of doctrinal and philosophical debate that run throughout its history." (Catalogue)

Not in God's name : confronting religious violence, by Jonathan Sacks. "2015 National Jewish Book Award Winner. Through an exploration of the roots of violence and its relationship to religion, and employing groundbreaking biblical analysis and interpretation, Rabbi Sacks shows that religiously inspired violence has as its source misreadings of biblical texts at the heart of all three Abrahamic faiths. "Abraham himself," writes Rabbi Sacks, "sought to be a blessing to others regardless of their faith. That idea, ignored for many of the intervening centuries, remains the simplest definition of Abrahamic faith." (drawn from Syndetics summary)

Why be Jewish? : a testament, by Edgar M. Bronfman.
Completed just weeks before the author's death, this charts his respect and love for his Jewish faith. This is a personal journey and walk through the main ideas and beliefs, explaining meanings and traditions gathered over a lifetime of study. He explains that even secular Judaism is still immersed in moral values derived from the ancient texts.

The grammar of God : a journey into the words and worlds of the Bible, by Aviya Kushner.
Aviya Kushner grew up in a Hebrew-speaking family, reading the Bible in the original Hebrew and debating its meaning over the dinner table. She knew much of it by heart - and was therefore surprised when, while getting her MFA at the University of Iowa, she took the novelist Marilynne Robinson's class on the Old Testament and discovered she barely recognized the text she thought she knew so well. ... the English translation often felt like another book entirely from the one she had grown up with. ... In this eye-opening chronicle, Kushner tells the story of her vibrant relationship to the Bible, and along the way illustrates how the differences in translation affect our understanding of our culture's most important written work. A fascinating look at language and the beliefs..."(Syndetics summary).

Putting God second : how to save religion from itself, by Rabbi Donniel Hartman. "Rabbi Donniel Hartman tackles one of modern life's vexing questions: Why are the great monotheistic faiths - Judaism, Christianity, and Islam - chronically unable to fulfill their own self-professed goal of creating individuals infused with moral sensitivity and societies governed by the highest ethical standards?" He observes that the primary focus of a relationship with God can distract religious believers from their own traditions' ethics. So he argues that decency toward one's neighbour must always take priority over acts of religious devotion.

The story of the Jews : finding the words : 1000 BCE - 1492 CE, by Simon Schama.
"It spans the millennia and the continents - from India to Andalusia and from the bazaars of Cairo to the streets of Oxford. It takes you to unimagined places: to a Jewish kingdom in the mountains of southern Arabia; a Syrian synagogue glowing with radiant wall paintings; the palm groves of the Jewish dead in the Roman catacombs. And its voices ring loud and clear, from the severities and ecstasies of the Bible writers to the love poems of wine bibbers in a garden in Muslim Spain. And a great story unfolds... (drawn from the publisher's description). Also available as a DVD

From enemy to friend : Jewish wisdom and the pursuit of peace, by Rabbi Amy Eilberg.
Rabbi Eilberg is the first woman to be ordained as a rabbi in Conservative Judaism. This is a practical guide to fulfilling the commandment to be an effective peacebuilder in the world. The book covers the basic causes of division, beginning with biochemically based human reactions to fear, and includes her own understandings on peace and conflict theory. The book draws on classical Jewish texts and the theology of later Jewish (e.g., Martin Buber) and non-Jewish religious thinkers. The disciplines and principles of Mussar, a system of Jewish moral discipline which began in the 10th century C.E., are included. (Adapted from Publisher Weekly) 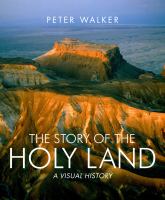 The story of the Holy Land : a visual history, by Peter Walker.
"With sites sacred to Judaism, Christianity, and Islam, the Holy Land and its people have had an impact on history out of all proportion to its size - and continue to do so today. The Story of the Holy Land is a short but authoritative overview of this fascinating story. Richly illustrated with superb photography, including original nineteenth and twentieth century shots from the Ecole Biblique in Jerusalem." (drawn from the publisher's description)

Jews and words, by Amos Oz and Fania Oz-Salzberger.
"These four long essays - really more of a free-flowing conversation between the noted Israeli novelist and his daughter, a historian-focus primarily on the Jews as "a nation only by virtue of its texts," from the Bible to the work of contemporary Israeli poet Yehuda Amichai - and the interpretations and argumentations that flow from them. The authors, secular Jews who are lovers of the Hebrew Bible, note that "Genesis, Isaiah, and Proverbs are our pyramids... our Gothic cathedrals... undemolished in the flow of time." They look specifically at the role of "vocal women," such as Eve and Lilith, in the Bible and biblical legends.... it will appeal to lay readers interested in a nonreligious Judaism based on contemporary readings of traditional and more modern Jewish texts. (drawn from Publisher Weekly, courtesy of Syndetics) 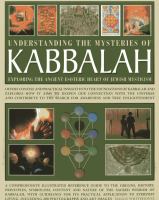 Understanding the mysteries of Kabbalah : exploring the ancient esoteric heart of Jewish mysticism : offers concise and practical insight into the foundations of Kabbalah and explores how it aims to deepen our connection with the universe and contribute to the search for awareness and true enlightenment, by Maggy Whitehouse.
This lavishly illustrated book covers the fascinating Kabbalah tradition, from its beginnings to its modern incarnation as a mystical path followed by many celebrities. It explains how the Tree of Life and Jacob's Ladder are at the heart of Kabbalistic teaching, bridging the gap between humans and the divine. (drawn from the publisher's description) 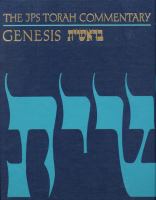 Genesis = Be-reshit : the traditional Hebrew text with new JPS translation, commentary by Nahum M. Sarna.
"Written by four outstanding Torah scholars, the JPS Torah Commentary series guides readers through the words and ideas of the Torah. Each volume is the work of a scholar who stands at the pinnacle of his field. every page contains the complete traditional Hebrew text, with cantillation notes, the JPS translation of the Holy Scriptures, aliyot breaks, Masoretic notes, and commentary by a distinguished Hebrew Bible scholar, integrating classical and modern sources." The library also has commentaries for Exodus = [Shemot], and Numbers = [Ba-midbar]. (drawn from Syndetics summary)

Ever had a hankering to know a bit more about Ancient Hebrew?
Learn at your own pace, in your own time, for free. If you wish, begin at the basic level which assumes no prior knowledge and work your way through the 50 lessons, with an option to save your progress.

Login with your library card details and select Biblical Hebrew from over 40 options available on Mango languages.

The Talmud : a biography, by Harry Freedman.
Jewish scholar Harry Freedman tells the engrossing story of an ancient classic, the pillar of Judaism and recounts the story of a book which parallels the history of the Jewish people.

The Sabbath world, by Judith Shulevitz.
Explores the Jewish and Christian day of rest, from its origins in the ancient world to its complicated observance in the modern one.

Wellington City Libraries subscribe to a number of different online databases that provide news and periodical articles on a wide range of topics. You will need to login in, entering your library card number and surname details. If you'd like to discover what our databases have, visit our online databases section, www.mygateway.info. Journal titles available in full text online include :