Welcome to Wellington City Libraries' page of resources on Hinduism. Here you'll find a cross-section of what the library holds on Hinduism, some quick links into our online databases and the library's catalogue, and links to websites on Hinduism selected by our subject librarians. The Dewey Decimal call number for Hinduism as a subject is 294.5. (A comprehensive list of Dewey numbers for other religions can be found on the Beliefs homepage.)

Why I am a Hindu, by Shashi Tharoor. "Opening with a frank and touching reflection on his personal beliefs, he lays out Hinduism's origins and its key philosophical concepts.... Tharoor is unsparing in his criticism of extremism and unequivocal in his belief that what makes India a distinctive nation with a unique culture will be imperilled if Hindu 'fundamentalists', the proponents of 'Hindutva', or politicised Hinduism, seize the high ground. ... Written in Tharoor's captivating prose, [this] is a revelatory and original contribution to our understanding of religion in the modern era." (drawn from the Syndetics summary)

Mudras for modern life : boost your health, enhance your yoga and deepen your meditation, by Swami Saradananda.
Mudras are subtle but effective hand gestures that boost health and wellbeing. With easy-to-follow instructions, inspiring artworks and informative photographs throughout, this is the definitive illustrated guide, ideal for both experienced yogis and beginners. Relieve stress, anxiety and fatigue, cultivate joy, peace and creativity, or enhance concentration and clarity. Discover the meditations, visualizations, breathing exercises (pranayama), mantras and yoga poses (asana) that enhance the power of the mudras. Benefit from a range of specially designed mudra routines for specific health issues, from stress and insomnia to arthritis and headaches." (drawn from the Syndetics summary) 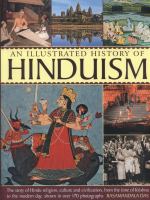 An illustrated history of Hinduism : the story of Hindu religion, culture and civilization, from the time of Krishna to the modern day, shown in over 170 photographs, by Rasamandala Das.
"Hindiuism is often called the world's oldest living major religion, and this beautifully illustrated history is an excellent introduction to the subject. It opens with a timeline and an account of how Hinduism has spread over time from India, its country of origin, to become a truly global religion. The central section describes the major holy texts, including the Ramayana, the Mahabharata and the Bhagavad-gita or Song of God. It ends with an exploration of Hinduism's profound teachings about the self, the law of karma, and the cycle of birth and death. This is the perfect book for anyone wanting to discover the history at the heart of Hinduism." (Syndetics summary)

The teachings of Ramana Maharshi, edited by Arthur Osborne.
This is a collection of Sri Ramana's instructions and discourses culled from three works: Who Am I?, Spiritual Instructions , and Maharshi's Gospel, arranged by topics such as work and renunciation, silence and solitude, peace and happiness, and the discipline of self-inquiry. Ramana Maharshi (1879-1950) was one of the greatest spiritual teachers of modern-day India. After spending some years in silent seclusion he began to reply to the questions put to him by spiritual seekers, and his many conversations and verbal teachings were recorded by followers.

Studying Hinduism in practice, edited by Hillary Rodrigues.
"Drawing on personal experiences of Hinduism on the ground, this book provides a reflective context within which religious practices can be understood and appreciated. It conveys the rich realities of the Hindu tradition and the academic approaches through which they are studied. The chapters cover a wide range of topics, including dance, music, performance, festival traditions, temples, myth, philosophy, women 's practices, and divine possession. .... All the entries are accompanied by photographs and suggestions for further reading." (Syndetics summary) 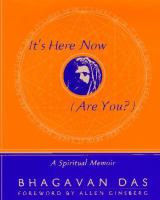 It's here now (are you?) : a spiritual memoir, by Bhagavan Das.
"In this inspiring spiritual memoir, Bhagavan Das fulfills his original mission as a messenger of Eastern wisdom and sheds needed light on the new spirituality of the West. Leaving California at age 18 with $40 and a guitar, Michael Riggs traveled to India, searching for something more than "the American Dream." Once there, he studied with several teachers and lived the austere life of a yogi, eventually falling under the loving blanket of Neem Karoli Baba, who renamed him Bhagavan Das, or "servant of God." For seven years Das moved through the subcontinent, from Bombay to Madras, Kashmir to Darjeeling, fully embracing Hinduism and all its practices, worshiping the Divine Mother, and studying Buddhism, transcendental meditation, and tantra. .... A spiritual adventure like no other,It's Here Now (Are You?)will inspire seekers of any age on their own road to fulfillment." (Syndetics summary)

Yes! we now have downloadable ebooks. Overdrive Ebooks is a free service.

Under the label "Browse Ebook Nonfiction" choose the Religion and spirituality heading to find books.

Hinduism for dummies, by Amrutur V. Srinivasan.
Explains the intricacies of the customs, practices, and teachings of this ancient spiritual system, including information on the rites, rituals, deities, and teachings associated with the practice of Hinduism e.g. the Vedas, Brahmans, and Upanishads.

Wellington City Libraries subscribe to a number of different online databases that provide news and periodical articles on a wide range of topics.

The International Journal of Hindu Studies is available as part of our Proquest suite of resources, while news articles e.g. the opening of a Hindu temple will be available via our newspaper resources.

Moksha : A Journal of Hindu Philosophy and Religion. (Electronic Journal)