Sorry, we are cancelling this Saturday’s ComicFest 2021 to keep everyone safe with the change in Covid-19 Alert levels. Thanks to our amazing and committed artists and sponsors, we will work together to discuss our future options for the events. While you’re at home, check out the amazing artists who have shared their stories below. Thank you for your understanding. Kia kaha and stay safe! 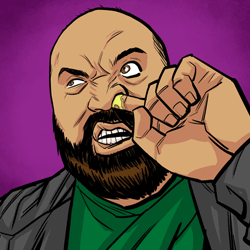 Michel Mulipola is a comic book illustrator and professional wrestler. Auckland-based Mulipola is a self-taught award-winning artist who has produced illustrations for Learning Media, Lift Education, Reading Warrior and independent US graphic novel series Headlocked. In 2006 he won the Gibson Award for Best New Zealand Comic Book Artist, in 2013 he was a grand finalist in the Secret Walls x Aotearoa Live Art Battles, and in 2016 he was awarded the Storylines Notable Book Award for Samoan Heroes with author David Riley.