Reading, Wellington, and whatever else – teenblog@wcl.govt.nz

In Happenings, LGBTQ+, stuff to do, stuff to read, Troubled teens trying to put their past behind them

It’s that time of year again! We’re midway through the 2022 Out On The Shelves campaign week, and all around the country, libraries, bookstores, schools, and other organisations are putting on displays and events to celebrate LGBTQIA+ stories, and to help connect rainbow people to those stories and to each other.

This year, the Out On The Shelves campaign runs from 13-27 June, and as well as admiring the beautiful displays at your local library, there’s all kinds of stuff to do! Here are just a few examples:

To whet your appetite, here are some of our favourite LGBTQIA+ books, retrieved from the vaults of these veritable librarians’ brains for your reading pleasure:

Aristotle and Dante dive into the waters of the world / Sáenz, Benjamin Alire
“Aristotle and Dante continue their journey to manhood in this achingly romantic, tender tale set against the backdrop of the AIDS epidemic in 1980s America. In Aristotle and Dante Discover the Secrets of the Universe, two boys fell in love. Now they must learn what it means to stay in love-and to build their relationship in a world that doesn’t seem to want them to exist. In their senior year at two different schools, the boys find ways to spend time together, like a camping road trip they take in the desert. Ari is haunted by his incarcerated older brother and by the images he sees on the nightly news of gay men dying from AIDS. Tragedy feels like his destiny, but can he forge his own path and create a life where he can not only survive, but thrive?” (Catalogue)

Our dreams at dusk. Volume 1 / Kamatani, Yuhki
“Not only is high schooler Tasuku Kaname the new kid in town, he is also terrified that he had been outed as gay. Just as he’s contemplating doing the unthinkable, Tasuku meets a mysterious woman who leads him to a group of people dealing with problems not so different from his own. In this realistic, heartfelt depiction of LGBT+ characters from different backgrounds finding their place in the world, a search for inner peace proves to be the most universal experience of all.” (Catalogue)

Elatsoe / Little Badger, Darcie
“Imagine an America very similar to our own. It’s got homework, best friends, and pistachio ice cream. There are some differences. This America has been shaped dramatically by the magic, monsters, knowledge, and legends of its peoples, those Indigenous and those not. Some of these forces are charmingly everyday, like the ability to make an orb of light appear or travel across the world through rings of fungi. But other forces are less charming and should never see the light of day. Seventeen-year-old Elatsoe (“Ellie” for short) lives in this slightly stranger America. She can raise the ghosts of dead animals, a skill passed down through generations of her Lipan Apache family. Her beloved cousin has just been murdered, in a town that wants no prying eyes. But she is going to do more than pry. The picture-perfect façade of Willowbee masks gruesome secrets, and she will rely on her wits, skills, and friends to tear off the mask and protect her family.” (Catalogue)

The pride guide : a guide to sexual and social health for LGBTQ youth / Langford, Jo
“Jo Langford offers a complete guide to sexual and social development, safety, and health for LGBTQ youth and those who love and support them. Written from a practical perspective, the author explores the realities of teen sexuality, particularly that of trans teens, and provides guidance and understanding for parents and kids alike.” (Catalogue)

Queerly autistic : the ultimate guide for LGBTQIA+ teens on the spectrum / Ekins, Erin
“From coming out to friends and family through to relationships, self-care and coping with bullying, being out and about in the LGBTQIA+ community and undergoing gender transition, this book is filled with essential information, advice, support and resources to help you on your journey, and also works as a primer on all things LGBTQIA+ for non-autistic teens just figuring it all out.” (Catalogue)

To break a covenant / Ames, Alison
“Clem and her best friend, Nina, live in the haunted town of Moon Basin, known for its accidents and murders that are linked to the now-abandoned coal mine, but when they join their new friend, Piper, and her dad on a trip into the mine, they find themselves haunted by strange dreams and experiences afterwards. The haunting at Moon Basin started when an explosion in the mine killed sixteen people. The disaster made it impossible to live in town, with underground fires spewing ash into the sky. Life in New Basin is just as fraught: the ex-mining town relies on its haunted reputation to bring in tourists, but there is more truth to the rumors than most are willing to admit…” (Adapted from Catalogue) 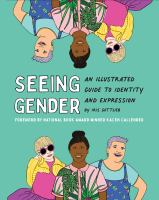 Seeing gender : an illustrated guide to identity and expression / Gottlieb, Iris
“Gender is an intensely personal, yet universal, facet of humanity. In this vibrant book, queer author and artist Iris Gottlieb visually explores gender in all of its complexities, answering questions and providing guidance while also mining history and pop culture for the stories and people who have shaped the conversation on gender.” (Catalogue)

She gets the girl / Lippincott, Rachael
“Alex Blackwood is really good at getting the girl she wants, but coming from a broken home with an alcoholic mother, she finds commitment difficult – even when she thinks she is in love. Impossibly awkward Molly Parker has a crush on the cool Cora Myers, but she does not know how to even start a conversation, much less make a connection. At college together in Pittsburgh, Alex decides that helping Molly snag Cora will prove to her own flame that she is not totally selfish – but things do not work out as the two have planned.” (Catalogue)

Invisibly breathing / Merriman, Eileen
“‘I wish I wasn’t the weirdest sixteen-year-old guy in the universe.’ Felix would love to have been a number. Numbers have superpowers and they’re safe, any problem they might throw up can be solved. ‘If I were a five, I’d be shaped like a pentagon … there’d be magic in my walls, safety in my angles.’ People are so much harder to cope with. At least that’s how it seems until Bailey Hunter arrives at school. Bailey has a stutter, but he can make friends and he’s good at judo. And Bailey seems to have noticed Felix: ‘Felix keeps to himself mostly, but there’s something about him that keeps drawing me in.’ Both boys find they’re living in a world where they can’t trust anyone, but might they be able to trust each other, with their secrets, their differences, themselves?” (Catalogue)